Australia seems to have a gala time in England as the team records yet another win against England in the on-going Ashes series. A clinical performance in the ODI series, a comprehensive show in the longest format, and a envious start to the T20 series amplify Australia’s dominance in the Ashes.
With 1-0 lead in the T20 series, the two teams locked horns on Sunday at Hove. Winning the toss and electing to bat first, England posted a paltry 121-8 in 20 overs. Apart from Tammy Beaumont (43), none of the English players looked in shape. The Aussie bowling seemed to be too good for the hosts. Jess Jonassen and Georgia Wareham picked up couple of wickets apiece with Ellyse Perry, Megan Schutt, and Delissa Kimmince contributing with one scalp each.
Chasing a modest score of 122, Australia achieved the feat in style winning the match by seven wickets and 13 balls to spare. The star performer of the day was the prolific all-rounder Ellyse Perry who scored an unbeaten 47 and joining hands with Perry was the skipper Meg Lanning with an equally blistering 43. Kate Cross, Katherine Brunt, and Sophie Ecclestone picked up one wicket apiece.
During the match, Ellyse Perry with her 1-17 and 47 not out became the first ever cricketer (both male and female) to score 1000 runs and pick up 100 wickets in T20 internationals. She also bagged the Player of the Match award for her scintillating all-round performance.
The last match of the T20 series and also the Ashes series will be played on Wednesday at Bristol. Though a dead rubber, England would look to close the series with some pride. 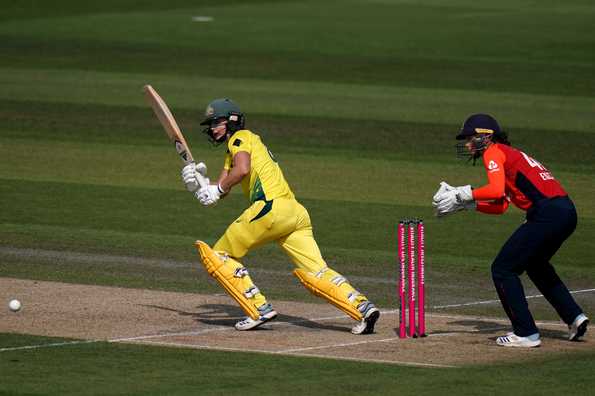