With the ICC Women’s World T20 just 20 days away, the preparations in all camps have gathered pace. The T20I tri-series among Australia, England and India comes at the right time to set the tone for the world championship to be held in Australia, the same venue for the tri-series.

The first match of the series was played between India and England on Friday at Canberra. Winning the toss and electing to field first, Women in Blue restricted England to 147-7 in 20 overs, courtesy a disciplined bowling effort. Left arm spinner Rajeshwari Gayakwad, who opened the bowling was the pick of the bowlers as she scalped 2-19 in her four overs. For England, it was skipper Heather Knight who stood out as she muscled a splendid innings of 67 (44). Tammy Beaumont gave her captain company as she struck a blistering 37 (27).

In reply, the Indians chased down the target in 19.3 overs winning the match comfortably by five wickets. The top order got off to starts but failed to capitalize as they were sent back at the half way stage. Skipper Harmanpreet Kaur came to the centre and took the game away from the opposition as she scored a match winning 42 (34) and remained unbeaten to see her side home. 34-year old Katherine Brunt was the pick of the bowlers for England as she struck with 2-33 in 3.3 overs.

India will play its next match against Australia on Sunday, while England will lock horns against the hosts on Saturday and look to make a comeback. 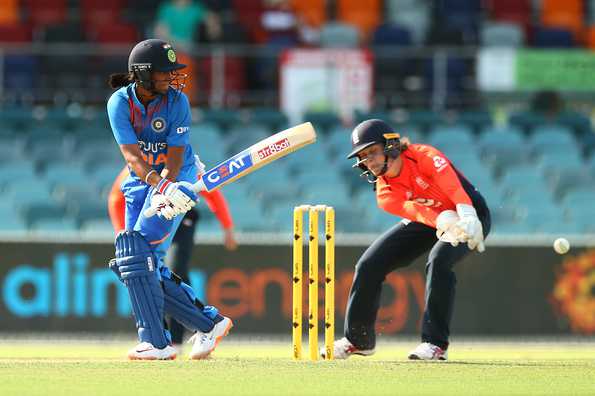