After facing defeat at the hands of India on Friday, England came back strong against the mighty Australians on Saturday at Canberra when the two teams locked horns against each other. Winning the toss and electing to field first, Australia restricted England to 156-4 in 20 overs. Riding on skipper Heather Knight’s swashbuckling knock of 78 (45), the visitors posted a competitive score on board.

In reply, the Aussies gave a tough fight as the match ended in a tie, with the decider super over to be played to arrive at the final result of the match. Opening bat Beth Mooney, who completed 1000 T20I runs,  scored a delightful 65 (45) to take her team close to the English target but was sent packing by Natalie Sciver (3-23 in 4 overs) at the crucial stage of the game. Australia managed to score 156-8 in 20 overs.

Both the teams fought hard and the 20 overs could not decide the fate of the game, which meant that a super over was inevitable to arrive at the winner.

In the super over, Alyssa Healy and Ashleigh Gardner managed to put up eight runs on the board as the left arm spinner Sophie Ecclestone decided to be very stingy with the ball. With nine runs required off six balls, Heather Knight led from the front and snatched victory from the jaws of defeat.

The wave of Super Over seems to have come to the trans Tasmanian shore as it saw back to back super over games being played in New Zealand (on Friday; India vs New Zealand) and Australia (on Saturday; England Women vs Australia Women). Why should boys have all the fun, right ladies? 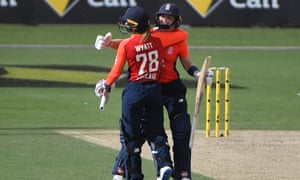